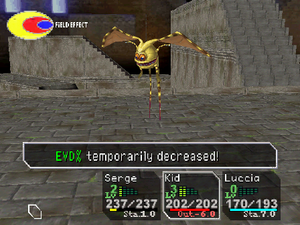 Evade, also known as Evasion, Evade%, Evade Percentage etc., is a battle mechanic and character statistic in the Chrono series. In most video games, the Evade Percentage statistic influences a character's or enemy's ability to dodge an attack. In Chrono Cross, Evasion can be augmented by casting the Blue Element, Nimble, and decreased by casting Numble, which is also a Blue Element.

This article is a stub about a miscellaneous detail. You can help Chrono Wiki by expanding it.
Retrieved from "https://www.chronowiki.org/w/index.php?title=Evade&oldid=45351"
Categories: