From Chrono Wiki, a database for the Chrono series that anyone can edit
(Redirected from Glenn (Chrono Trigger))
Jump to navigation Jump to search

"I am no pet, I am an accomplished swordsman, green as I may appear. "
— Frog

Frog (カエル, , Kaeru?) is a knight from the Middle Ages in Chrono Trigger. His real name is Glenn. He was presumably a squire under Cyrus, a "Knight of the Square Table." (This pun only exists in the SNES/PS version.) Glenn had a notably close, although platonic, friendship with Queen Leene. He later witnessed Cyrus's death at the hands of Magus, and shortly afterward, was transformed into an anthropomorphic frog by the dark mage. Frog dedicates his life to protecting Queen Leene and vows to avenge Cyrus by killing Magus. Blaming himself for failing to be strong, Frog is depicted as chivalric but mired in regret over the past. He is the true bearer of the Masamune, an ancient sword whose offensive capabilities against magic users is Magus's major weakness. Frog can later put Cyrus' ghost to rest, regaining his courage and clearing his conscience, and he has the opportunity to either defeat or ally himself with Magus. Frog wields a broadsword and can learn "Water" magic once he meets Spekkio; like Marle, he also features a few healing techs.

In his changed form, Frog only stands around four to five feet tall. However, he is immensely strong, since he is able to wield the Masamune with ease. His amphibian physiology allows him to jump very high and move very swiftly by hopping. A few of his Techs involve the use of his long, sticky tongue to grapple enemies. Although transformed into an animal, Frog continues to wear human clothes, seemingly out of habit rather than apparent need. Iconic for his green cape, Frog also wears britches, a belt fitted with a scabbard, boots, and blue gloves.

Glenn was born in Guardia, possibly in Truce or Dorino. His closest friend was Cyrus, who was several years his senior. The children in his home town often teased him for reasons unknown. Glenn never fought back since it hurt him emotionally to try and hurt another. Cyrus told him he was too soft. Several years later, when Glenn was a teenager, Cyrus declared that he was going to enlist as a royal knight of Guardia. He asked Glenn to come with him, but Glenn didn't feel he'd make a good knight. After Cyrus protested that Glenn was better than he with a sword, Glenn explained that he didn't think he could bring himself to hurt others.

In the end, Glenn came to Guardia to serve as Cyrus' squire. He journeyed with Cyrus on many adventures, including a battle the Toad King which yielded the retrieval of the Hero's Badge. Glenn and Leene became close friends, the young queen always fearing for his safety. 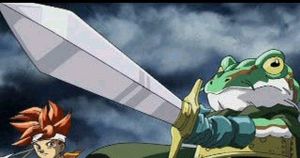 Frog and Crono in the FMV of the PlayStation release.

The Battle with the Fiendlord[edit | edit source]

In c. 590 AD, Cyrus and Glenn departed to face the Fiendlord Magus. Together, they traveled to the top of the Denadoro Mountains to claim the Masamune from Masa & Mune. Cyrus single-handedly managed to defeat the twin Mystics, and they offered him use of the sword out of admiration for his skills.

Shortly thereafter, armed with the only weapon that could defeat him, Cyrus faced Magus. Glenn could only stand back and watch, afraid to get involved. Cyrus charged Magus, but was blown back by his powerful magic. The Masamune shattered.

Magus, in an act of utter spite, cast one final spell that killed Cyrus. Glenn picked up the broken hilt of the sword, growing angry and vengeful. Magus remained unimpressed. Ozzie suggested that Glenn looked like an angry, hopping toad. Taking his general's advice, Magus cast another spell that transformed Glenn into an anthropomorphic frog and flung him off the mountain.

The War with the Mystics[edit | edit source]

Since then, Glenn (now calling himself "Frog") has fought a one-man war against the Fiendlord's armies. He is consumed with regret and self-loathing over his weakness in the fight against Magus, and continues to blame himself for Cyrus' death. He dwells alone in a hidden grotto deep within the Cursed Woods.

The Kidnapping of the Queen[edit | edit source]

Ten years later, Frog learns that the Mystics have kidnapped Leene, and goes in search of her. He calls off the search when Marle is found in Truce Canyon and is mistaken for the Queen. Continuing his investigation, he knows that the queen is still in danger. He arrives at Manolia Cathedral, where he meets up with Crono and Lucca and discovers the cathedral to be a secret Mystic base. Together, the three of them defeat the boss Yakra and rescue both the queen and the Chancellor, whom Yakra had been impersonating for quite some time.

Rescuing them and returning to Guardia Castle, Frog departs once more, stopping only to marvel at Marle's uncanny resemblance to the queen. Leene begs him to stay, but Frog bows respectfully and disappears back into self-imposed exile.

Along the way, Frog lost track of the Hero's Badge, the magic sigil that showed one's true strength and aided the wielder of the Masamune. The badge is found by Tata, who is taken to be the new Hero.

Frog wanted no more to do with the Masamune, the badge, or even trying to be a hero. All he could think of was how he was nothing like Cyrus. 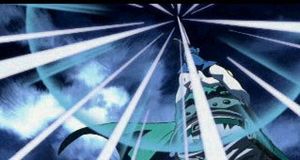 Recovering the Hero's Badge from a terrified Tata as well as the shards of the Masamune, Crono and company confront him, saying that he is the only one who can wield the Masamune and defeat Magus. At first, he is unwilling to help them, citing his own weakness. They then discover the hilt of the blade, which leads them to Melchior. When the sword is reforged, they return to Frog's hideout and ask him to help them defeat Magus once and for all.

Crono, Frog, and their ally proceed to the Magic Cave, the only way to reach the Fiendlord's Keep. Finally taking hold of the Masamune, Frog uses its awesome power to cleave the foot of the mountain in two, opening up the long-sealed pathway to Magus.

After facing his generals - Slash, Flea, and Ozzie - Frog and the rest proceed to the inner sanctum where they find Magus. Magus uses powerful magic against them, but Frog uses the Masamune to break his nigh-impenetrable magic barrier, allowing them to harm him. Their battle weakens him, which causes him to lose control of his spell to summon Lavos. The creature begins waking up too early, and the space-time distortion it causes sends them all hurtling through time. 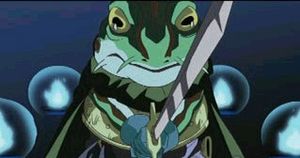 Frog braces for the assault against Magus in the FMV.

In the Antiquity (12000 B.C.), they learn that the so-called "Prophet" is actually Magus in disguise. They find Magus on the North Cape, and Magus offers Frog a chance for revenge. If Frog managed to kill him, the spell on him would be broken and he would become Glenn once more.

It is up to the choice of the player whether to slay Magus or allow him to join the company. (The canon is that Frog spares him.) Frog sheaths his blade, saying that killing Magus would not return Cyrus nor give him back his life.

In the Present, Frog finds the restless spirit of Cyrus. In the past, they are able to repair Cyrus' grave which puts his spirit to rest. Proceeding to his final resting place, Cyrus' spirit descends and empowers the Masamune, making it stronger than ever.

Several endings of the game, particularly those that show the departure of the main characters back to their own time periods, have two variants based upon Frog.

Should the player decide to fight Magus the second time on the North Cape in the Antiquity, the spell on Frog would be broken, but not until the end of the game. When the group says their farewells on the last evening of the Millennial Fair, a tall, green-haired knight approaches them, thanking them for their help. Marle and Lucca realize that he is actually Frog transformed back into a human, and cannot help but admire how handsome he is.

If Frog spares Magus, the game ends with him looking off into the horizon on the peak of the Denadoro Mountains, reminiscing about Cyrus.

Defeat Lavos after giving the Masamune to Frog, but before fighting Magus, and the ending sequence will begin at Lucca's House. The group will celebrate their victory over Lavos. In the middle of the party, Frog slips away, saying he has unfinished business. The scene then switches to Magus' Castle. Frog moves through the Castle, easily killing Slash, Flea, and Ozzie. He moves through the castle traps and confronts the keep's master, Magus. The two battle to the death, knowing one of them will not walk away alive. 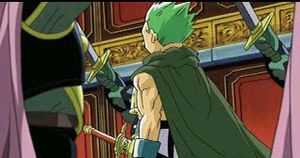 Frog transforms back into Glenn and is knighted by the King Guardia XXI.

The sequence ends with a unknown silhouette perched on top of the keep. It is never revealed whether it is Frog (who has had the spell broken by Magus' death) or Magus who walked away the victor of the duel.

Another ending shows Marle post-Lavos, confronting her father. Both her and her father have some unseemly attributes. They croak and hop like frogs, suggesting they were descendants of Queen Leene and Frog, although the relationship between the knight and his liege is said to be strictly platonic.

An ending exclusive to the FMV of the PlayStation release depicts Frog transforming back into a human male. A large ceremony including all of the nobles of the court and the royal guard is held for him, and the King, wielding a jewel-encrusted sword, knights him.

Frog is a very skilled swordsman (er, swordsfrog), able to fight multiple enemies with ease. Upon meeting Spekkio, which can happen any time after the Masamune is reforged, Frog learns to use Water magic. He is also able to summon forth a powerful, giant frog to trample his enemies. Frog's ability to deal out large amount of physical damage, heal, and inflict magic damage causes fans to consider him one of the most useful characters in the game.

Frog's element is water, so he takes extra damage from fire attacks.

Frog's Japanese name Kaeru is a pun as this can be read both as "frog" (蛙) or the verb "to transform, to change" (変える).

In the English translation Frog speaks in a grandiose, semi-Shakespearean manner, using words such as "thou," "thee" and "shalt," though strangely no one else from his era speaks that way—including Frog himself when shown in flashbacks as Glenn. Its interesting to note that in the Japanese version, he does not speak with the "Middle Ages Accent", and instead talks rather rudely(often cursing). Ironically, Frog's old English speaking style has been removed from Chrono Trigger DS and adheres to his original speech in the Japanese version.

There was speculation that Glenn was the human form of Frog, as they both have the Tech X-Strike. However, Glenn is merely a reference. Frog is from 600 A.D. and Glenn is from 1020 A.D.; Glenn's father is Garai and his older brother is Dario. Frog had no such relatives.