From Chrono Wiki, a database for the Chrono series that anyone can edit
< Chrono Wiki:Featured Article
Jump to navigation Jump to search 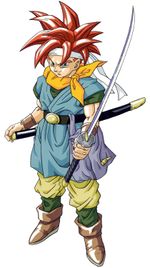 Crono (クロノ, Kurono?, "Chrono" in Japanese media) is the silent protagonist in Chrono Trigger. He lives with his mother (whose name is given as Gina in the Japanese version) in Truce village under the rule of the Kingdom of Guardia.

In 12000 BC, when the party is confronted with Lavos in the Ocean Palace of the Kingdom of Zeal, he sacrifices himself to save his friends, though he can be revived later in the game. With time travel, the player can manage to replace Crono in the moment before he dies with a copy received from the Millenial Fair in 1000 A.D, saving his life. While the other six playable characters have many lines of dialogue, Crono's responses to events are usually implied only through reaction and gesture, often for comedic effect. Crono speaks once in one of the endings to Chrono Trigger, saying just a few lines of dialogue. He uses a katana as a weapon and once he obtains magical ability, his Techs become lightning-oriented. In the original Japanese version of the game, Crono's element was Ten (天, Ten?), which means "heaven". In the DS version of Chrono Trigger, Crono's element is translated to Light, which is more in line with the original Japanese translation.

There are some points where he's shown to have romantic feelings for Marle.(more...)