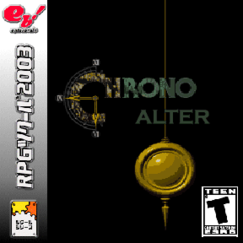 The 'Box Art' of Chrono Alter.

Chrono Alter is a fan made game directed by Lance VII and produced by Overture Studios. The game is a remake of Lance's earlier game Chrono Chronicles.

Chrono Alter opens one year after Chrono Trigger. Crono and Marle are on a date on top of a mountain. Soon after, they are attacked by a resurrected Lavos. The two are thrown into separate gates, and Lavos vanishes. Crono wakes up in a village he doesn't recognize. After talking to the villagers, Crono decides to speak with the king. After meeting with him, the King reveals that he had a letter for Crono. The letter was stolen by a group of mystics who have a hobby of stealing things. Crono enters the cave and confronts the leader of the group; Sir Kreepy. Before the battle begins, Glenn enters the battle. The two team up and defeat Kreepy. Glenn reveals that he was also attacked by Lavos and sucked into this world. Once they retrieve the letter, they realize it's from Schala. The two set off to locate Schala and Marle.

Meanwhile, in 1001 A.D., Lucca becomes concerned. After finding out the gates have been reopened, she sets off to 2301 A.D. in search of Crono and Marle. She finds Robo who is trying to stop a robot rebellion. They two defeat the robots, and Robo ponders his fate.

Crono and Glenn find themselves in a waterway leading to the next continent. At the end of the waterway, they find Marco; An airship obsessed treasure hunter who will let no one find anything first. The two defeat Marco and continue on. After visiting with Revar, a wise mansion owner, the two learn that Marle is being held by a knight name Fargo. The two depart for his fort, and finally locate Marle. The two free her, and defeat Fargo. He reveals that Dalton is also in this world, and warps away. The three move to the next village, where they find out Schala has visited. The elder reveals that she can teleport people to certain places. The three use this to move to the next nation.

Lucca and Robo arrive in the prehistoric ages. They meet up with Ayla, who is trying to fight off the last of the reptites.

Crono, Marle, and Glenn arrive in the Kingdom of Midguard. They learn that Dalton has taken over this country, and has been oppressing the people. After obtaining two powerful swords, the party departs to fight Dalton. The party uses a sewer to enter Dalton's Keep, and free the prisoners of the castle. The three move to the throne room, where a brainwashed Magus reveals himself as Dalton's servant. Dalton reveals that Fargo has located Schala, and leaves Magus to defeat the party. The group defeats Magus, and he regains his senses. He joins the party, and after taking a boat by force, leads them to Terra Tower on the desert continent.

In the past, Lucca, Robo, and Ayla defeat the green Tyrano. They soon decide to look on top of the mountain where Crono and Marle were last seen.

Crono, Marle, Magus, and Glenn scale Terra Tower. Once at the top, they witness a captured Schala trapped in a Magic Circle. Dalton reveals that he intends to fuse Schala to Lavos in order to open the doors to the Temple of Ages. Once inside, he plans to capture the essence of Time itself; The Chrono Crystal. He binds the party, and casts the spell on Schala. Schala vanishes as Lavos lets out a scream. Dalton and Fargo leave for the temple. The party decides to try and find the airship Marco was talking about in order to enter the temple.

The party arrives on the northern capital. There, they find out that Marco has located the flying machine. The party enters his manor in order to get it from him. During the confrontation with Marco, Lucca, Robo, and Ayla arrive to help. After his defeat, Marco discusses what lies in store in the temple. He warns them of the crystal's guardian; The Time Dragon. Marco reveals the airship to be the revived Epoch. The party boards the Epoch and lands in front of the temple.

The seven heroes enter the temple. As they progress, the encounter Fargo. The knight reveals to be a Zealian Scientist that was caught in the vortex of the Ocean Palace incident. He tells the party that he studied Reptite DNA, and gained the ability to shapeshift into a dragon. He transforms and fights the party. After his defeat, he dies laughing. The party continues and locates Dalton and the Crystal. They fight Dalton and defeat him. Before they can land the finishing blow, he reveals he absorbed the Time Dragon. He opens a portal, and invites the party to fight him.

After an intense battle with the Dragon over the planet, Dalton is defeated. In a last ditch effort, he rips a hole from the Darkness Beyond Time to the End of Time. He slips through the gate, and drops the Crystal. The party realizes that Lavos is in the DBT, and enters the gate to defeat the parasite once and for all. In the DBT, Schala appears before the party. Magus jumps at the chance to save her, but is beaten back by his sister. She reveals that she is the Dream Devourer; A monster created from the combination of Schala and Lavos. The party engages Schala in the hopes she'll be freed. She vanishes, and the Dream Devourer appears before the party. They decide the best chance is to push it back into the darkness.

After a long, fierce battle with the monster, it falls back into the darkness. Magus notes that it should return soon. Lucca believes that she can shut the gate between the DBT and the End of Time. Everyone but Crono and Magus leaves through the gate. Magus tells Crono that he will stay behind and save Schala. Crono leaves Magus to his mission. As Magus prepares himself, a teenage girl named Kid appears before him. She reveals herself to be Schala. The defeat of the Dream Devourer allowed Schala to have her mind for short time. She tells Magus there are people who need him more than she does. She sends him away to an unknown time.

In the End of Time, Gaspar reveals that he had been watching the party the entire time. He and the party believes Magus to be dead. As the party mourns their friend, Marle and Crono reveal their intentions to get married. After learning that the gates will remain open for a couple of days, the entire party attends the wedding. After the wedding, Glenn, Robo, and Ayla return to their own times. Crono states his confidence that the Entity will call forth it's heroes should the Dream Devourer ever rise again.

After the credits, we see Robo in an unknown facility. Belthasar reveals himself and welcomes Robo to Chronopolis. He then begins to explain 'Project Kid'. In the final scene of the game, we see Magus wandering through the Dark Ages. He decides to honor Schala's wish, and departs for the earthbound village.

On Feb. 17th, it was confirmed that Chrono Alter would have a sequel titled 'Chrono Echoes', inspired by Chrono Trigger: Crimson Echoes.