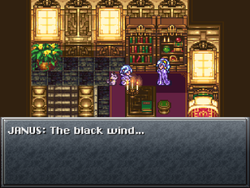 Janus tells Schala about the Black Wind at Zeal Palace.

Black Wind is a recurring motif in the Chrono series. It appears nominally in Radical Dreamers: Nusumenai Hōseki as a spell cast by Gil.

In Chrono Trigger, Magus refers to the Black Wind as a magical force, denoting the presence of Lavos. He feels the phenomenon at Fiendlord's Keep, while attempting to summon the creature allegedly responsible for his sister, Schala's, demise. Teleporting to Antiquity via a Gate in the crater of the destroyed Tyranno Lair, Crono, Ayla, and his friends meet Janus, the original Magus, in Enhasa, a magic city floating far above the earth. They follow him to Zeal Palace, where they witness him having a private conversation with Schala. He informs her that he has felt the "Black Wind" again and fears the madness of his mother, Queen Zeal, may be the cause of the strange and darkly ominous energy. Schala lends him her pendant for protection. In the Ocean Palace, when Lavos emerges, a wind-like audio track plays, possibly referring to the Black Wind.

In Chrono Cross, the Black Wind is a covert intelligence organization interested in the Frozen Flame. Suspecting the Lord of Viper Manor knows of its whereabouts, the organization employs Norris to spy on him and his Acacia Dragoons. He poses as a dishwasher until Kid's poisoning.