From Chrono Wiki, a database for the Chrono series that anyone can edit
(Redirected from 65000000 BC)
Jump to navigation Jump to search

Prehistory (原始, Genshi?) (also known as Prehistoric in the SNES/PS version) is the year 65,000,000 BC in Chrono Trigger. It is the furthest back in time that the party can reach during their adventure (unless one counts the End of Time, which theoretically exists at both ends of the timeline). It is also the era in which Lavos first descends to the planet's surface.

The Prehistory time period is defined by the struggle between the primitive human race and the technologically superior Reptites. Dinosaurs, massive primates, and other savage wildlife comprise the non-sentient races of this era.

The majority of the humans in Prehistory live in Ioka Village, a tribal village overseen and protected by Chief Ayla. Ayla serves as the champion for humankind in this era, and is among the few humans strong and determined enough to stand and fight against the advances of the Reptites. The party experiences the pre-modern culture of the Ioka during a festival held in their honor, where they participate in events that are still present at the Millennial Fair, 65,001,000 years later, such as tribal dance and drinking contests. 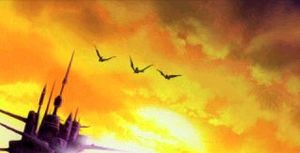 Prehistory in the FMV of the PlayStation release.

The humans of this era are just starting to develop technology, though they have already progressed to the meager beginnings of a capital economy (using Fangs, Feathers, Petals, and Horns as currency); Prehistoric craftsmen can create weapons and armor for every character in the party (though it is interesting to note that Ayla, the only party member from Prehistory, fights with her bare fists). Fangs, Claws, Petals, and Horns can be found by defeating enemies in the Hunting Grounds, a jungle near to Ioka. The Hunting Grounds are periodically drenched by torrential rain, during which it is possible to engage a Nu in combat. Defeating the Nu provides a large number of all four currency, as well as a Mop, which Crono can equip.

The only other major human settlement is never fully explored by the party, as it is initially hidden in the jungle and the later destroyed. This village, Laruba, is populated by humans who have chosen to hide themselves rather than fight the Reptites. The village, and the forests surrounding it, are burned down by Reptites during the course of the game, and the party only explores the ruins in the aftermath. It is implied that the chief of Laruba Village controls access to the Dactyl Nest, a nearby mountain range. Dactyls (large, winged dinosaurs) have been tamed (though not apparently domesticated) by the people of Laruba, and can be used as flying mounts with the Chief's permission.

The Reptites control two major areas. The first is simply called the Reptite Lair, and is little more than a deep cave surrounded by a dense jungle, known as the Forest Maze. The Reptites use this location as a staging ground for their attacks on Ioka Village and their attempts to locate Labura Village. The party enters the Reptite Lair after losing the Gate Key while searching Prehistory for the Dreamstone. It is also the first place Crono and his allies come face-to-face with Azala, leader of the Reptites.

Also found in this era (as it is in every era) is the Sun Shrine. 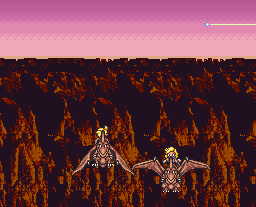 Kino and Ayla ride Dactyls in one of the many endings of Chrono Trigger.

In stark contrast to all other areas of Prehistory is the massive Tyranno Lair, a technologically superior Reptite fortress. Only reachable by air, the Tyrano Lair houses the Reptite's most fearsome warriors and weapons, including Nizbel and the dreaded Black Tyranno. The Tyranno Lair is actually the impact site of Lavos' descent to the earth's surface, and is almost completely destroyed during the course of the story. The buried ruins of the Lair are later found in the Middle Ages, called Giant's Claw.

After Lavos strikes the planet, the natives of Prehistory comment on the decreasing temperatures, indicating the beginning of the Ice Age that would dominate the surface of the planet during the age of Antiquity.

Although the people of this era speak in mock-caveman English, they also have an independent language. While most of the language is neither spoken nor appears as readable text in game, Ayla gives the hint that Iokans have a special language. When Lavos collides with the content, Ayla mentions that, in Iokan, the word "Lavos" means "Big Fire". "Vos", meaning "Big" and "La" meaning Fire. The latter is probably derived from the word "Lava'.

Ayla is the only playable character from this time.